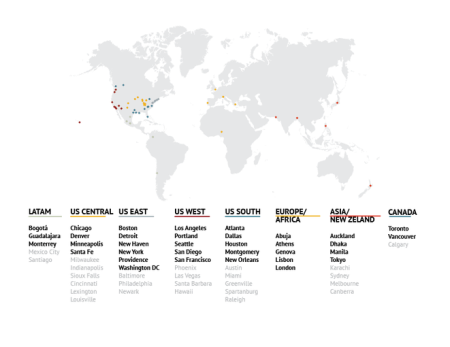 map of the chapter network

When the Architecture for Humanity headquarters announced they were filing for bankruptcy last January, many of their local Architecture for Humanity chapters were taken by surprise. Instead of closing up shop like their parent office, these community-based AFH chapters banded together and decided to stay open and continue to serve their communities around the world.

Not only have they shown their resiliency by continuing on, these chapters have decided to rebuild an organization that better supports the needs of their volunteers and communities. The first major step was establishing a steering committee representing chapter leaders from each region worldwide. The second major step was announced last week, they have hired a transition coordinator! Alicia Breck is a strategist who works with government and not-for-profit organizations involved in city resilience and socio-economic development. She will be working closely with Garrett Jacobs, Acting Chair, and the rest of the steering committee.

See more information on the Chapter Network website. Stay in touch with the DC Chapter – mattj@afh-dc.org